Coca-Cola has officially kickstarted the countdown to Christmas as it announced the return of its iconic Coca-Cola Christmas Truck Tour, stopping off at locations including Gainsborough’s  Marshalls Yard, much to the delight of eagerly awaiting fans.

It started its tour in Edinburgh on 15th November, the Coca-Cola Truck will visit 19 towns and cities nationwide before making its final stop in London on Sunday 15th December.

The truck will be at Marshall’s Yard on Friday 29th November and Saturday 30th November, from 12pm – 7pm on both days.

In a snowy winter wonderland setting, visitors will be able to enjoy festive photo moments, win Christmas prizes and enjoy a 150ml Coca-Cola zero sugar to get them in the Christmas spirit. In addition, when the Christmas Truck stops at ASDA and Sainsbury’s stores, shoppers will be able to purchase a pack of 250ml glass bottles of Coca-Cola and have the labels personalised with their name at the Truck for a special festive treat. 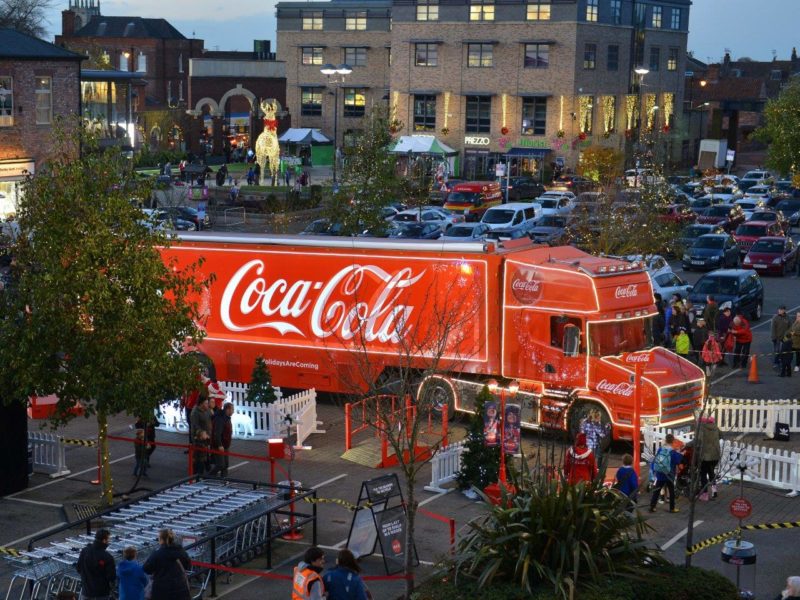 This year Coca-Cola has partnered with Crisis – the nation’s leading charity committed to supporting the end of homelessness. With the aim to raise awareness and funds for the charity, which is now in its 52nd year, Coca-Cola will donate 10p for each Truck Tour can recycled by visitors, which Crisis aims to use to support hundreds of homeless people with education, training and advice. The initiative not only aims to back the charity, but also encourage recycling as part of Coca-Cola’s World Without Waste goal – a global pledge to collect and recycle a bottle or can for each one sold by 2030.

Continuing to bring festive magic to people across Great Britain ahead of the big day, the sight of the Coca-Cola Truck is often said to mark the official start of Christmas and has done so ever since it first appeared in Coca-Cola’s famous ‘Holidays Are Coming’ advert 24 years ago.

Kris Robbens, Marketing Director at Coca-Cola Great Britain and Ireland, comments: “Christmas is all about sharing special moments with friends and loved ones and we’re looking forward to spreading the festive cheer across Great Britain again this year with our iconic Coca-Cola Christmas Truck Tour.

“Whilst Christmas is a moment of celebration, it’s also incredibly important to remember those that need support throughout the season. So, we’re really pleased to partner with Crisis and whilst guests at the tour enjoy a refreshing Coca-Cola zero sugar, when they recycle their can, they’ll be helping to support an amazing charity.”

Alison Shipperbottom, centre manager at Marshall’s Yard said: “This will be the third year that we have welcomed the Cola truck here in Gainsborough and we thrilled to have been selected as a location for the iconic tour this year.

“It’s going to be a very special festive two days and we’re very grateful to our event sponsor Martin & Co estates and lettings agent, based here at Marshall’s Yard.

“Please do keep an eye on our website and social for details of additional parking closer to the time.”

To find out more about the Coca-Cola Christmas truck tour and see the full schedule, visit www.coca-cola.co.uk/trucktour. Christmas fans can also get involved @CocaCola_GB (Twitter) and @CocaColaEU (Instagram) and join the conversation using #HolidaysAreComing.

From Australia to America, viewers from across the world came together to be part of the first ever Lincolnshire Show Online.

The Government’s Plan for Local Lockdowns

The PM's recent speech highlighted that we need to move away from national lockdown measures, to targeted, local measures.