Some of the best and most influential names in Lincolnshire business gathered together to celebrate their success at the Lincolnshire Live Business Awards 2019.

There were cries of joy and smiles all around as the winners were revealed at the glitzy award ceremony at the Epic Centre, Lincolnshire Showground on Thursday, October 17.

Small, large and family set-ups were just some of the businesses honoured throughout the night, which was hosted by magician and future Dancing on Ice star Ben Hanlin.

Sponsored by CoolDC and GBMS Tech among others, the evening highlighted the wide range of talent in businesses from across the county.

The first award of the night, sponsored by Oldrids and Downtown, was the Apprentice of the Year.

This was won by Martha Kitchen, an Engagement Officer from the Lincolnshire Co-op, who said: “I’m over the moon.

“When I heard my name my heart just stopped! I’m doing a level six apprenticeship, which lasts three years, and I’m really looking forward to the rest of it. I’m so thankful.”

Gail Jackson took home the Business Person of the Year award, which was sponsored by Wilkin Chapman Ltd.

“I was really honoured to be named on the shortlist and I was up against some really amazing people, which makes it even more special.

“I’m looking forward to building on this next year!”

Victor Bencalovici was named the Employee of the Year. After winning the award, which was sponsored by Barbon Insurance, he told Lincolnshire Live: “That was so unexpected – I’m shaking!

“The business really believed in me and what I was able to do. They encouraged me to try different things and helped me so much throughout the year.”

Steve Middlebrough, Global Head of Service Manufacturing, said: “We’ve sponsored the award before and we are so thrilled to win it.

“Siemens has been so focused on the community, because it’s so important to us, and we’re really proud to do what we do.” 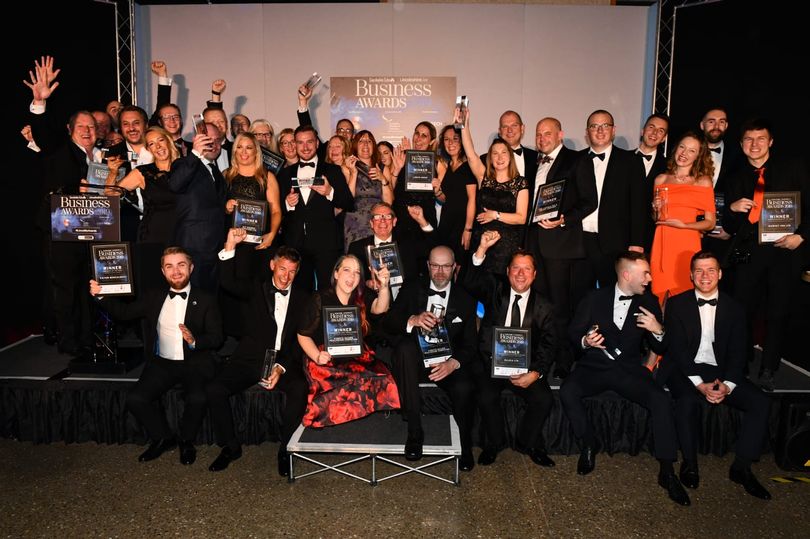 The Food and Farming Excellence Award was sponsored by LJ Fairburn and was won by JRH Water Management Ltd.

Michael Jorden, the owner, said: “It’s amazing, we were really just happy with being shortlisted, so to win – really proud.

“We are expanding, we have clients from Scotland to Cornwall and we are still a small business in Lincolnshire. So we are excited about the future.”

James Foster, the managing director, said after the business’ win: “We have to thank every single person who has helped us get here and win this award.

“It’s a great team. We have more than 400 different members of staff who work with international businesses and we are proud of each and every one of them.”

Sara Hobson said that her team at Lindum were “absolutely delighted” after taking home the Education, Training and Skills award – sponsored by the University of Lincoln.

“We absolutely did not expect this,” she said afterwards.

“It’s been a really good year and everyone has been so supportive – it’s a really hard industry. Across the group, everybody has put in so much work and we try to bring young talent through.

“It’s not just one person so this is for everyone.”

Next up was the Innovation award, which was sponsored by the University of Lincoln Research and Enterprise. This was won by HIT Energy.

Simon Hopkins, director at the company which specialises in solar Photovaltics, said: “We’re just normal people, a bunch of engineers. We’re like a small family.

“This came from an idea over a pool table and it’s turned into something incredible.”

The award for the Best Digital Campaign, sponsored by Ellgia, went to the team at Wallbreaker.

The video production company was praised for “delivering on their client’s ideas”.

Ash Wilks is a video producer at the company. He said: “We have been nominated for a couple of years and it’s always nice to be nominated. It’s fantastic to win this year.

“We value our clients and how they view what we do over awards and we’ve been really happy with the feedback.

“We have a lot planned going forward.”

Coaching Inn Group were awarded the Family Business of the Year, sponsored by Micronclean.

“We didn’t expect this at all,” CEO Kevin Charity said.

“It’s been a great year for the company and it’s especially great for us to achieve this as we won it as a family.

“It’s quite rare, I think, for this to happen and it’s such a special moment for us.”

Siemens sponsored the Employer of the Year award, which was given to Starglaze Windows and Conservatories.

Kev Wallis was among an emotional team of recipients as they accepted their award on-stage.

Mr Wallis said: “Over the moon – it’s absolutely amazing. For a big company to be recognised for how it treats its staff, who are so important, is great.

“Everybody, from management to staff, knows everybody and it’s like one big family. We wanted this so much so we’re absolutely chuffed.”

Amy Willis and Harry Poderskis were both awarded the Start-up Business of the Year award, sponsored by Bishop Grossteste University, for their hospitality company Market Inn.

“I’m blown away. So many hours have gone into this, we live and breathe what we do – we are so passionate about it.

“We want to push on now and keep growing!”

The Small Business of the Year award, sponsored by Motor Delivery, was won by the Lincoln Tea and Coffee Company.

“To see so many customers picks up awards and nominations and to win an award ourselves is just perfect.

“The whole team has been outstanding and all credit to all of them.”

The Large Business of the Year award was given to Ellgia Ltd by Lincolnshire County Council‘s Colin Davie, Executive Member for Economic Development.

“We’ve come so far. We were a small business in 2011 and now to be a large business and win this award is a mark of how much we’ve progressed.

“We’re looking to double our business in the next five years.”

“We can’t believe it – we had no idea we were even up for two awards so it’s come as quite a shock! What a night.

“We’ve got an awesome group of people who support us and the past few years we’ve expanded the company and we’re really looking forward to the future.”

Finally, Matt Corrigan was honoured with the Lifetime Achievement Award – sponsored by CoolDC and GBMS Tech.

Mr Corrigan, former director of Lincoln BIG, was unable to attend the awards ceremony as he is currently in Japan watching England in the Rugby World Cup.

He said via a video message: “I am absolutely delighted to receive this award.

“It’s wonderful to be recognised in this way. We have been in partnership with hundreds of businesses – the city has really changed and grown.

“It’s been a fantastic privilege to be a part of that. It’s something I will treasure.”

News  of a buoyant housing market, both for builders and buyers has been welcomed by Wilkin Chapman's Jonty Pearson.