Attracted by the mild, sub-tropical climate and miles of white sand beaches, 946,848 people have made Pinellas County their home.

With an average 360 days of sunshine each year and beaches ranked among the best in the U.S., the county is also the most popular tourist destination on the Gulf of Mexico, drawing nearly six million tourists annually.

As an established county, the significant infrastructure – including schools, utilities and roadways – is already in place. Pinellas is also well connected with regional access provided via Interstate-275, two international airports, and the largest port in Florida.

Pinellas’ diverse communities range in population from more than 252,000 in St. Petersburg (St. Pete) to slightly more than 100 in Belleair Shore, and nearly all capitalize on living in a waterfront paradise.

Pinellas lies at the center of the robust Tampa Bay market, which is expected to grow from its current population of 4 million to 6 million by 2030.

The market’s significant economic clout is also evidenced by more than $70 billion in consumer spending and a labor force 2 million strong.

The region is ranked number 20 in the U.S. for job growth and carries the country’s 13th largest media market

Anchored by the urban markets of Clearwater and St. Petersburg, Pinellas has the second largest base of manufacturing employment in Florida. Fortune 500 technology manufacturers Jabil Circuit and Tech Data are headquartered here. Pinellas has diverse, yet symbiotic, industry clusters, including aviation/aerospace; defense/national security; medical technologies; business and financial services; and information technology.

An extensive network of suppliers, service-providers and business associations support operations in these sectors. Relocating businesses can move to Pinellas and expect to begin growing immediately. 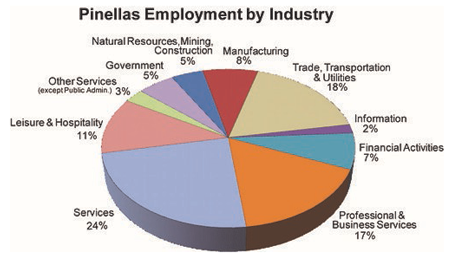 The county is home to numerous business accelerators, like the Tampa Bay Innovation Center, TEC Garage, the Gazelle Lab and Clearwater’s SPARK, which are committed to nurturing and building new ventures.