Building on the deal

Join the British Chambers of Commerce through their Year of Trade Programme.

This final event in this series will look at the UK/EU deal which contains a range of provisions under which the deal might evolve, whether because of suspected breach or as the basis for building up the relationship in key areas.

Here we will gaze into our crystal ball and look at how trading relationships might change over time.

Chaired by James Martin, Director of Policy, British Chambers of Commerce our speakers include: 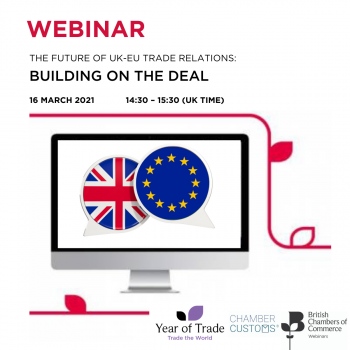 A FREE webinar to help your business start exporting, with focus on opportunities in UAE.

Free forum for advice on how protect your business, staff, and customers from cyber criminals.

Learn current Rules of Origin, how to establish where goods originate "officially", and more.